A Brief History of Frascati 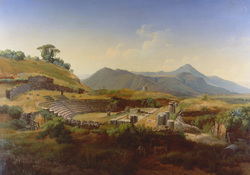 The Origins
The name of the town seems to derive from the custom of putting branches over the doors of wine cellars to announce the arrival of the 'new' wine,  for the 'fresco' of the climate (it was once called Frescati) or the rural huts made with tree branches (Italian: frasca) built by the inhabitants of Tuscolo (ancient Frascati), when their town was destroyed by the Romans in 1191. Medieval Tuscolo stood on the site of ancient Tusculum, which according to tradition was founded by Telegonus, son of Ulysses and Circe,  or by descendants of Aeneas of Troy. Inhabited by the Latins and Etruscans, which had been defeated by the Romans with the help of Castor and Pollux (the Dioscuri, giant cavaliers on winged horses) in the battle of Lake Regillo in 496 b.c. However the Romans, instead of razing it to the ground, realised that it was a perfect retreat, so built magnificent villas on the site. Tusculum was thus chosen by Ancient Romans as their holiday destination. Villas were owned here by Cicero, Seneca, Lucullus, and Nero.

Middle Ages
The counts of Tusculum were the most powerful secular noblemen in the region, between the 10th and 12th centuries. Several popes and an antipope during the 11th century came from their ranks. They created and perfected the political formula of noble-papacy, wherein the Pope was arranged to be elected only from the ranks of the Roman nobles. Pornocracy, the period of influence by powerful female members of the family also influenced papal history. Particularly Marozia, born Maria (c. 890 – 937), daughter of Theophylact I, Count of Tusculum. Her three marriages/relationships bore a string of Popes and Counts that held the power in Rome. Edward Gibbon wrote of her that the "influence of two sister prostitutes, Marozia and Theodora, was founded on their wealth and beauty, their political and amorous intrigues: the most strenuous of their lovers were rewarded with the Roman tiara, and their reign may have suggested the darker ages fable of a female pope''. The bastard son, the grandson, the great grandson, and two great great grandsons of Marozia — a rare genealogy — were seated in the ''Chair of St. Peter." Pope John the XIII was her nephew. The counts of Tusculum remained arbiters of Roman politics and religion for more than a century.
Tusculum was located at the top of the hill behind Frascati. It was linked to Rome by a road and it gave its name to a part of the Alban hills. The amphitheater and other ruins can still be seen and visited.

Renaissance
Frascati itself became an important town in the second half of the XVIth century after Alessandro Ruffini, a prelate of the papal court, and Cardinal Marco Sittico Altemps, nephew of ﻿Pope Pius IV﻿ , built villas in Frascati. Their example was followed by the most important Roman families and in 1620 there were already 14 villas around Frascati. Obviously the same architects and artists that they had hired for their Roman Palaces were commissioned. The choice of Frascati as a location for summer retreats (as in Roman times) was based on various factors: the absence of malaria, a commanding (and strategic) view which ranged from the Apennines to the Tyrrhenian Sea, the availability of water, the woods which covered the hill behind the town and, of course, the abundance of VINEYARDS Spending the 'villeggiatura' at Frascati or in nearby locations became customary for the wealthiest families and for the popes too, who still spend the summer at Castelgandolfo.  The villas built by the cardinals are collectively known as Ville Tuscolane and they were in part embellished with marble columns and artefacts from the ruins found at Tusculum or in the ancient villas.

The fortifications of Frascati were relatively minor, although the town was surrounded by walls. Its defence was mainly based on a small fortress controlling the road from Rome. Built by Cardinal Guillaume d'Estouteville, perhaps the richest cardinal of his time and the Dean of the Sacred College for more than twenty years (1461-83). Later turned into the residence of the bishops by ﻿Pope Paul III﻿.

(In the summer of 1943 General Albert Kesselring, commander of the German troops in Italy established his headquarters at Villa Falconieri near Frascati. This led to the town being heavy bombed on 8th of September by the Allies. Most of the medieval quarter behind the fortress was destroyed, with the exception of the bell tower of S. Rocco dated 1305.)

The square in front of the Cathedral was embellished by a fountain in style with the façade and similar to a Roman nymphaeum. It incorporated a 1619 inscription which celebrated the completion of two aqueducts built by Pope Clement VIII Aldobrandini and Pope Paul V Borghese to provide Frascati (and the many fountains of their family villas) with an ample supply of water.

Baroque
In 1693 Carlo Fontana was commissioned the enlargement of an existing Jesuit church. His project however was too expensive and the construction of the new building was postponed. The church was eventually enlarged on the basis of a project by Father Gregorio Castrichini. Similar to il Gesù in Rome and other Jesuit churches throughout the world, the façade was embellished with the head of a cherub.

The Jesuit church replaced a previous one which was founded by Lucrezia Della Rovere, niece of Pope Julius II. It is believed that her beauty inspired Raphael's portrait of St. Barbara in Madonna Sistina.

In line with the Jesuit tradition of sumptuously decorating their churches, the interior of Chiesa del Gesù has many rich altars and statues.  A large bequest from Olimpia Aldobrandini, the last of her family, paid for the renovation of the church.

In 1685 Father Andrea Pozzo painted an illusory dome at S. Ignazio in Rome. It was meant to be replaced by an actual dome, but it met with such an appreciation that it became a permanent feature of the church. Father Pozzo was asked to paint the ceiling and the apse of the Jesuit church at Frascati. Because at the time he was busy with the decoration of Jesuitenkirche in Vienna, the execution of the paintings at Frascati was entrusted to Antonio Colli, one of his assistants, who painted the fresco reproducing in trompe L'oeil the altar canopy of St. Peter's in Rome.

Royal Resident
Henry Benedict Stuart was born at Palazzo Muti Balestra in Rome in 1725. He was created Duke of York by his father James and Cardinal by Pope Benedict XIV in 1747. In 1761 he became Bishop of Frascati, where he spent most of his life, taking active part in the embellishment of the town. In 1788, following the death of his brother Charles Edward, Henry declared himself Henry IX of Great Britain, France and Ireland, although publicly he referred to himself as Cardinal-Duke of York, he never challenged the authority of King George III, by whom he received a pension in the last years of his life. Together with his father and brother he was eventually buried in St. Peter's in a monument designed by Antonio Canova. Being sincerely pious he proved a zealous administrator of his see, reforming the clergy, and founding a seminary which he endowed with a magnificent library.

1800's
The neat design of the Cappucini church of Frascati offers a striking contrast with that of the Jesuits or the Cathedral. It is located in what was a thick wood on the hill behind the town. This because at the origin the order was meant for hermits and therefore all monasteries were built out of town and on high ground (in Rome too). Lucien Bonaparte, Napoleon's brother and archaeological enthusiast  moved to Villa Tuscolana ( then called Rufinella), on the Tusculum hill in 1806. He was in need of funds and decided to make himself some money by selling most of the artifacts found there. Later in 1825 and then between 1839 and 1840  Maria Cristina of Savoy, the wife of King Carlo Felice, commissioned further excavations in which many prestigious statues were uncovered. These were transferred to the Castle in Agilè, in Piedimont, where they are kept.

Thanks to R. Piperno for lending us most of this text, taken from his fantastic Blog on Rome and the surrounding areas http://www.romeartlover.it/ Check it out, it's in English.