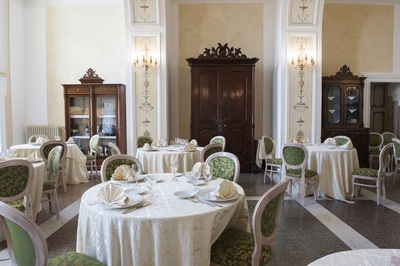 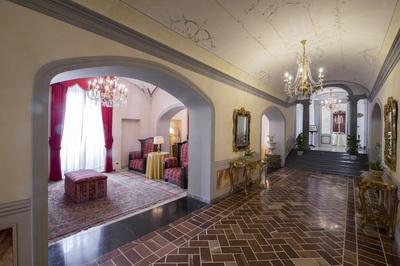 HOTEL VILLA TUSCOLANA
The core of the villa dates back to 1578 commissioned by Cardinal Alessandro Rufini, already owner of Villa Rufina (also known as Villa Falconieri). The name "Rufinella” was given to distinguish it from the 'other' villa.
After Rufini's death, Villa Tuscolana belonged the Reverend Apostolic Chamber, that in 1580 bequeathed it to cardinal Guido Ferreri, grandson of Carlo Borromeo and relative of Pio IV.
Many owners followed over the years: cardinal Francesco Sforza, Mario I Sforza, Count of Santa Fiora, Vincenzo de 'Nobili, etc. Then from 1639 the villa stayed in the hands of the Sacchetti family for nearly a century.
The appearance of the seventeenth-century villa, a simple three-floor building with the main facade to Rome, was typical of almost every Tusculum villa, surrounded by luscious gardens.
In 1740, the Sacchetti family gave the Villa to the Jesuits who radically changed its appearance.
Further renovation and additions to the Villa were executed by architect Luigi Vanvitelli famous for the Reggia of Caserta.
During the renovation many archaeological finds came to light, from the Villa of Cicero, called "The Tuscolano", so the name of the villa changed to "Villa Tuscolana".
In 1804 the villa was acquired by Prince Lucien Bonaparte (Napoleon's brother), eager to dig for ruins on the surrounding Tuscolo Hill.
After the kidnapping of the family portraitist (mistaken for Lucien himself) Bonaparte sold the villa in 1820 to Maria Anna of Savoy, Duchess of Sciablese, subsequently to Maria Cristina, wife of King Carlo Felice of Sardinia and later to King Vittorio Emanuele. From 1872 the villa belonged to family Aldobrandini Lancellotti.
Heavily damaged by World War II, the villa was renovated in 1966 by the Salesian Order, then the current owners returned the Villa to its previous grandeur, creating a four star hotel offering 100 rooms and suites and a state-of-the-art spa, inspired by ancient legends of Lymphae, from a tiny island on Lake Paterno, capable of inducing ecstasy, down in the ancient Roman grottoes on the lower ground floor. A cocoon of luxurious treatments. It also has its own à la carte restaurant and conference facilities. A wonderful venue for weddings, business events and family parties.

Your easyfrascati pass entitles you to 10% discount on the Spa treatments.
For room rates and to book, click on the BOOK NOW button above