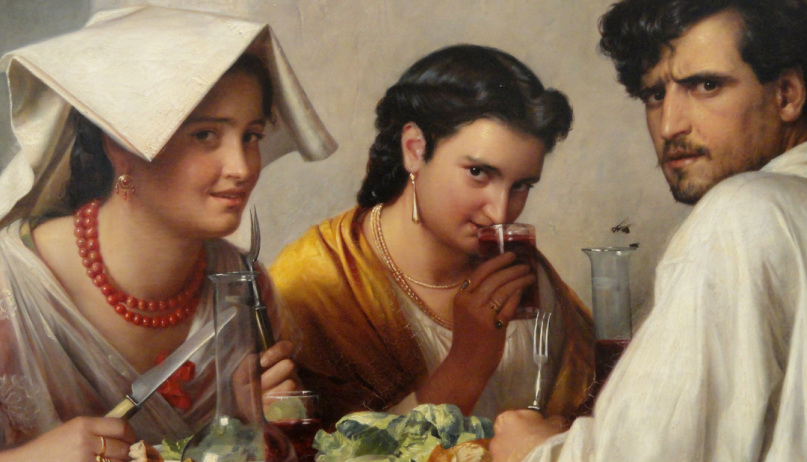 If you love cooking, check out our favourite food blog for recipes and Jo Donghi's great posts in English:
https://frascaticookingthatsamore.wordpress.com/

The cuisine in Frascati and the Castelli Romani is, nowadays, a fusion of traditional Roman dishes and the original Castellana cooking. D.O.P. products include the world famous Porchetta, that, although from Ariccia, a nearby town, is readily available throughout the towns of the 'Castelli'. This moist, seasoned and boned spit-roast pork, is usually bought from road-side kiosks (to eat at their tables or 'on the go' ) and put in a roll of local bread: 'casareccio', Genzano or Lariano (made from 'lievito madre' - a yeast obtained from the flour itself rather than using brewer's yeast.) Other local specialities include Marzolino cheese, made from the milk of cows that have eaten Spingtime grasses. Coppiette are strips of dried meat (originally horse meat, now usually pork or beef) that are seasoned with fennel seeds, rosemary and chili pepper, garlic and wine. They used to be a typical 'snack' given to accompany Castelli wines, a sort of 'quick fix'. They can be more or less chewy, but very tasty. La vignarola, is a vegetable dish that consists of a medley of broad beans, peas, artichokes, ham and bacon.  Matticella artichokes (originally from Velletri); globe-artichokes that are baked on a boiling hot stone on which smoldering vine offcuts are used as charcoal. The Roman 'intruders' are Pajata- try it first then ask what it is (!) or ox-tail in sauce, used as a condiment for pasta or as a meat 'second' (main) course; Porcini mushrooms that often come from the woods around Rocca di Papa, Rocca Priora, or Velletri and Lariano. Roman Percorino cheese (made with ewe's milk) is a favourite for smothering pasta especially for the very popular 'cacio e pepe' spaghetti (cheese and black pepper, sometimes mixed inside a scraped out cheese round, or served in a basket made out of a 'wafer' of melted cheese). Not to forget are 'evergreen' favourites: Carbonara, Gricia (a type of Carbonara without the egg), bucatini (fat hollow spaghetti) all'Amatriciana (jowel bacon and tomato sauce) and Aio-oio spaghetti dishes. The latter being simply spaghetti smothered and mixed in hot olive-oil that has had garlic pieces sizzled in it, with a pinch of hot, chopped chili pepper. Popular modern dishes are mixed antipasti, which depend on the creativity of the chef, now often served with 'aperitivi' that can be almost a dinner in their own right! Truffle crops up here and there. Fish is popular as it goes well with the local Frascati wines and a lot of fashionistas look for raw fish dishes (red imperial prawns, oysters, shrimps, sea truffles and even finely chopped raw cod and squid).
if you are lucky you might find somewhere that still knows how to cook snails (lumache - pronounced loo-ma-kay). They have to be kept without any food for a few days to make sure they 'clean' their intestines. These were typically eaten on the 24th of June on the 'notte delle streghe' (the witches' night) to warden off evil spirits, when bonfires were lit and the more snails you ate the more evil you managed to keep at bay (one evil deed per snail horn).
You'll probably notice strange looking biscuits in bakery windows around Frascati too, in the shape of a woman with three bosoms, notoriously 2 for milk and one for wine. These are made with honey and darn hard so don't bite on them until you've left them 'in the air' to soften a while, or dip them in liquid (a good excuse for supping more Frascati wine!!). Frascati has its own 'biscotti' which are called 'tozzetti', great for dipping in the sweet Cannellino Docg wines. You might like to know that the tradition of making these biscuits (and indeed egg-noodle pastas) comes from the necessity of using up egg yolks - left over from using the whites of the eggs for clarifying wines in olden days- that were then offered to farm-hands and friends who had worked in the grape harvest; a feast called 'la Cortesia', a sort of 'thanksgiving' held once the new wine was ready.
get your free foodie guide